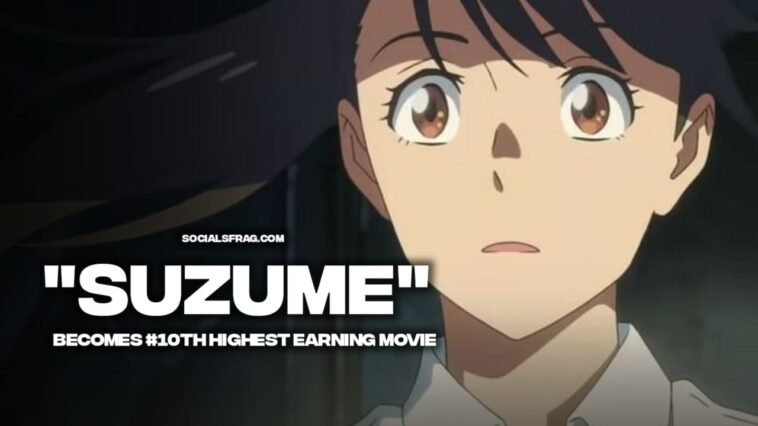 In the past, we have seen many anime movies surpassing other genre and dominating the highest grossing movies chart. Adding one more movie to this, Makoto Shinkai’s “Suzume No Tojimari” made it to the list of the top 10 highest Grossing Anime Movies of all time by taking the position of The Wind Rises.

Makoto Shinkai’s Suzume No Tojimari debuted in the theaters of Japan on November, 11, 2022. In the initial run of three days the movie sold 1.33 million tickets and earned 1.88 billion yen (about US$13.49 million).

This huge collection proceeded it to become the strongest opening three days of Shinkai’s films (Your Name, weathering with you, etc).

Comparing the earnings of Suzume with other recent releases, only Jujutsu Kaisen 0, Demon Slayer, some Ghibli films, Shinkai’s own last two films and One Piece Film Red have earned more in Japan.

The movie will open worldwide in early 2023. Crunchyroll, Sony Pictures Entertainment, and Wild Bunch International will release the film worldwide except in Asia.

Are you excited for the release of Suzume in your nearby theaters? Comment down and let us know your thoughts. Also, don’t forget to share this article with your friends.

We post anime and manga news articles daily, so make sure to also follow us on our Instagram and visit our home page for previous updates.