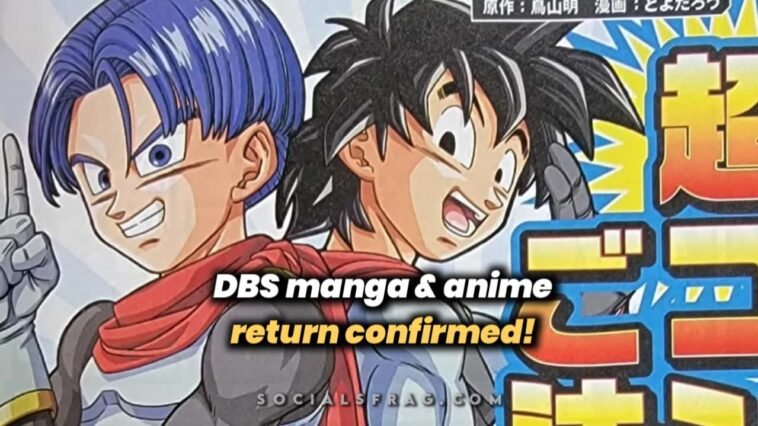 Dragon Ball Super is already a monthly manga and it’s on break since August. It was rumored that the manga would return before the end of this year, well it looks like the rumor was totally true. Not only we are getting new DBS manga arc this December but reliable sources are also hinting at an announcement of the return of Dragon Ball Super brand new anime.

According to the Vjump editor, Victory Uchida, the Dragon Ball Super manga will return next month on December 20th! Along with the release date, they also revealed what’s this new arc is going to be about.

This new DBS arc will center around Goten & Trunks and their way to become Super Heroes! All eyes on the duo, we could expect to see a lot of Gohan & Piccolo in the Manga!

The Story of new arc is going to be a prequel to “Dragon Ball Super: SUPER HERO” movie (events that happened just before the movie).

Both Goten & Trunks are grown up now just as we saw them in Super Hero movie. They look exactly like their character design from Dragon Ball GT.

Apart for the manga return, we are also getting DBS new anime announcement next month. All reputed sources in Dragon Ball community are stating that during the first few weeks of December we will be getting an announcement from officialls about the new Dragon Ball Super anime.

The announcement would be made in conjunction with or immediately after the release of the DBS: Super Hero 4K UHD/Blu-Ray in early December.

The anime won’t be a direct continuation of DBS, or an adaption of the DBS manga. This is going to be a new thing & the quality is assured to be great!

Its hype worth is more than Super Dragon Ball Heroes but less than DBS 2. But it should still be something for those starving for DB content.

Comment down your thoughts on the return of Dragon Ball Super manga and about the new DBS anime. Also do not forget to share this article with your friends.